À la Folie follows in the tradition of "pocket operas". Unclassifiable, the show is at the crossroads of theatre and opera.

A voice is heard. It is that of the singer who sings what cannot be said. Her voice and her body express madness. She is accompanied not by a symphony orchestra but a concert accordionist, while a narrator gives us an insight into the female heroines interpreted by the Soprano and tells us about the operas and their history.

All three speak of lost, distraught madwomen, hysterics, subversives, driven crazy by love and despair. Together, they accompany us to the heart of the music at its deepest, most intimate and most beautiful.

With this creation, Michelle LARROCHE makes the world of opera accessible to everyone, opening its doors to those who may know nothing about it and allowing fans to hear the great soprano arias being interpreted in an unusual way: on the accordion and through the prism of the texts of an early feminist, Catherine Clément. 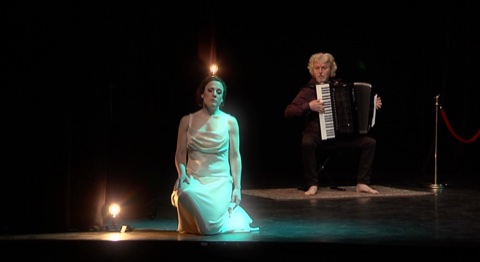