Caught between the Israeli occupation and the threat of radical Islamism, the Christians of Palestine are being driven into exile and their number is inexorably declining, even though their presence in the Holy Land goes back 2000 years. Faced with the apparent indifference of the West who has abandoned them to their fate, today they are left helpless and in every sense of the word, against the Wall.

There have been many reports, documentary and fiction films about Palestine with all its facets and multiple stakes, set against a background of the conflict between two peoples that has been going on for seven decades: Palestinians and Israelis. Very few have looked at it from the angle we have chosen; that of the Palestinian Christian community. Some may consider the small number of people in that community as being insignificant, but that would be to forget that they are the direct heirs to the first Christians and the guardians of the holy places for the whole of Christendom worldwide.
Recently, the international community has become aware of the fate reserved to Christians in the Middle East, persecuted in Iraq and Syria by radical Islamists, under the banner of Isis or Al Qaeda. But the Palestinian Christian community is largely ignored by the media because of the low density of its population and because its issues are, for the moment, different. Like their Muslim contemporaries, Palestinian Christians mainly suffer from the Israeli occupation.
Prevented by the occupation from imagining a viable future on the land of their ancestors, Palestinian Christians are being driven into exile and their numbers are declining inexorably. Those who do decide to stay, find themselves left helpless today, and in every sense of the word, ‘Against the Wall’. Must we imagine, as some predict, the Holy Land without the descendants of the first Christians?
The approach of this documentary was to specifically go to meet this community of Christians, and understand the central role they continue to play, in spite of their small number, in Palestinian society and in the resistance to the occupation. Beyond their specific religious customs and their diversity, what values do they try to convey and live out on a daily basis, based on their history, culture and heritage? To address the Israeli-Palestinian conflict through the prism of the Christians who have been living in this land uninterruptedly for 2000 years, is also to get away from the cliché of religious antagonism between Jews and Muslims. 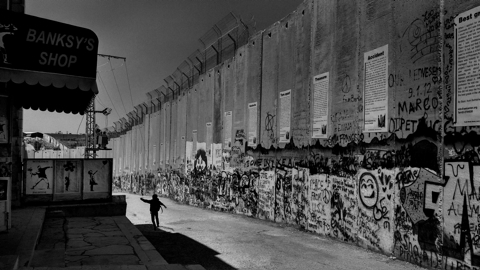