A rich and robust interpretation of Langsamer Satz by Anton Webern, composer of the Second Viennese School. The melodic impetus remind the end of the romantic period, particularly well developed by this sensitive and touching ensemble.
A real modernity magnificently revealed by the quartet Les Dissonances.

The Six Bagatelles Opus 9 are composed in 1913 and marked a major break with tradition. The musicians of the quartet Dissonances have perfectly adapted their playing to the very modern sound essential to the performance of this work.
We would appreciate all the qualities of the musicians in their various playings and techniques essential to these filled with difficulties short Six Bagatelles. 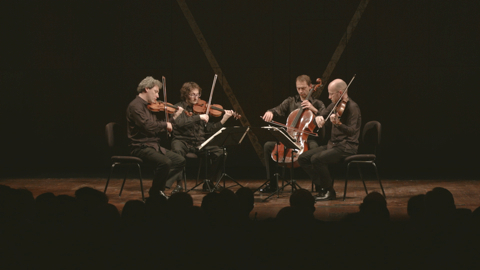