The story of a woman surrounded by men, in an emerging society.
The story of an untamed spirit constrained within a 19th century corset.
The story of a woman refusing the limitations imposed on women of her time.
Calamity Jane is hired by the Khol and Middleton company for a tour in which she recounts her exploits and sells her autobiographical book “Life and Adventures of Calamity Jane, by Herself”.
Accompanied by Ringo, her long-time companion, and Doc, the manager of the show, the performances light up the saloons with a carnival atmosphere, reminiscent of a freak show... Until the day Calamity reveals the secrets she’s been keeping for many years: the reality of life as a female pioneer and one shared by many other women.
The musical arrangements evoke a legendary and vanishing Wild West.

Recorded at the Théâtre Montdory in Barentin on May 18th, 2019 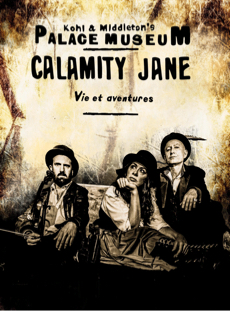