Since the “Manif Pour Tous” against the opening of marriage to same sex couples, a new militant wind is blowing amongst Catholics.
France, the country of secularism, has often mistreated them. But now, with Taubira’s “marriage for everyone” bill, they are waking up and revealing themselves.
They are between 20 and 27 years old. They are polite, well dressed and in higher education. Uninhibited and sharing none of their parents’ reserve, they have decided to affirm their faith and to make it known. God plays a major part in their vision of society. This is the “new generation” of Catholics.
For more than a year we have seen them in their thousands, relentlessly taking to the streets, holding vigils by the glow of streetlights, even praying in front of the Senate. It would have been inconceivable a few years ago, but why should they hold back when other religions have no qualms about continually flaunting themselves?
Although their numbers have greatly diminished since the war, Christians are returning to France. But who are they? What is this new line of God worshipers? How do they live with their faith? Do they embody the revival of the French Church or, on the contrary, a radicalisation of Catholicism?
Whatever their backgrounds, their origins or ways of practising, for these young Catholics, faith alone is not enough. Their Christian identity, fully accepted in their private spheres, must also be accepted in the social, cultural and even political arena. A student, a young MP and a philosopher, their names are Maÿlis, Vivien and Anne-Sophie. 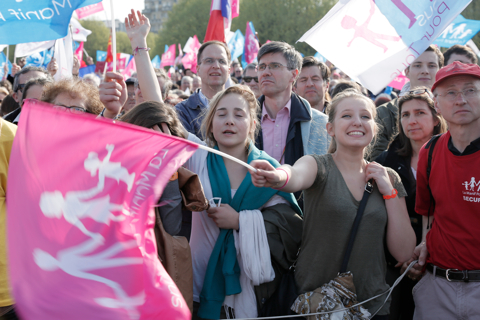