An authoritarian People’s Republic or a real dictatorship? In less than a generation, China has become the economic engine of the planet. But what if this economic power, which seems to take precedence over political and social power, was in the hands of a dictatorship whose single aim was to expand its power in order to continue existing? This documentary proposes to reveal the real face of China and to get inside the propaganda machine.

For the first time, a French director-journalist will join an official trip to the heart of one of the most secret regions in China: Xinjiang. Unstable and by far the most volatile province in the country, it’s a unique opportunity to visit an area that’s normally out of bounds to tourists.

Located in the far northwest of the People’s Republic, on the borders of central Asia, Xinjiang is the scene of frequent clashes between the Chinese authorities and the Uyghurs, Turkish-speaking Muslims who, like their Tibetan neighbours, reject the colonisation of their territory.

Going beyond the Uyghur problem (which gets less media coverage than the unrest in neighbouring Tibet) the aim of this documentary is to decipher the propaganda that is currently being put out by the Chinese, who are trying to convince the world, and Chinese tour operators in particular, that the region is a haven of peace, a heaven on earth suitable for mass tourism.

Thanks to reliable contacts amongst the organisers of this “Chinese tour” and the help of diasporas based in Europe and Central Asia, and thanks also to accounts given here for the first time by Turkish-speaking Muslims and footage of the most recent revolts, we’ll be able to draw a parallel between a slick, consensual tour and the distress of an entire race.

To get a better understanding of the extent to which everything here is built on lies and propaganda, we shall show videos shot by the minorities themselves as well as their accounts. It’s the kind of footage we rarely get to see, showing a reality that China would prefer to keep hidden. 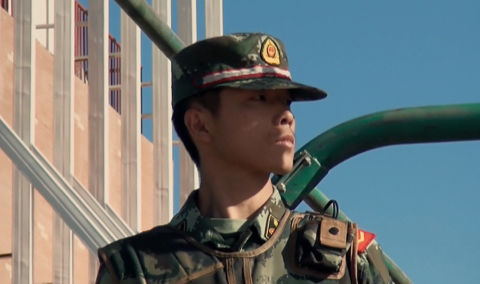