It's a pictorial adventure: the painter at work in her studio, the filmmaker’s point of view in this intimate and silent space, in which only the painter speaks. Over time, between the first stroke of the brush on the white canvas and the finished painting, the filmmaker leads us, without saying a word, into the heart of the creative process, with its doubts, its challenges, its intentions. And in the end, there’s a finished work that the viewer will have seen created in front of his eyes.

Christine Trouillet lives and works in Ardèche. She paints interiors with no people in them. 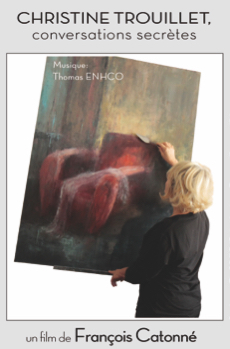