The Cappella Mediterranea Ensemble, created in 2005 by Leonardo García Alarcón is taking on a challenge: to play 27 unpublished scores from Francesco Cavalli, in the famous Scuola Grande di San Rocco, Venisce, Italy.

Born in February 1602 in Lombardy, Francesco Cavalli started as a singer, then he became organist, and a chapel master in 1668. He began writing for the stage in 1639, quickly went famous and was invited to Paris in 1660 in order to produce the opera Xerse and in 1662 Ercole Amante, opera written for the wedding of Louis XIV. Cavalli is the most important composer of his generation for public opera. He uses a string orchestra with bass which was unique at the time.

The aim of the Cappella Mediterranea Ensemble in 2005 is to go back to the sources of the aesthetic ideals of the great composers of southern Europe. United by a rare artistic complicity with its director, the ensemble has set itself three challenges: to reorientate the approach to Baroque music in the Latin tradition on the basis of recent musicological discoveries in the field of Italian rhetoric; to codify the Baroque parameters that still survive in the folk music of southern Europe; and, finally, to retrace the south-north trajectory, typical of all the arts, from the Renaissance to the Baroque. Its recordings of music by Barbara Strozzi, Giovanni Giorgi, Giuseppe Zamponi and Michelangelo Falvetti are regarded as benchmarks. In 2013, Cappella Mediterranea was guest ensemble at the Aix-en-Provence academy for the new production of Cavalli’s opera Elena, under the direction of Leonardo García Alarcón. Hence arises the project to interpret the unknown works from Cavalli.
The idea was supported by the ambitious conductor Leonardo Garcia Alarcon, born in Argentina in 1976. He studied at the Early Music Centre in Geneva and taught harpsichord with Christiane Jaccottet. He wanted to become a "maestro al cembalo". Leonardo Garcia Alarcon received the Gabriel Dussurget Award, at the Aix en Provence Festival in 2012 and the price of the International Music Press “Antoine Livio” in 2013. 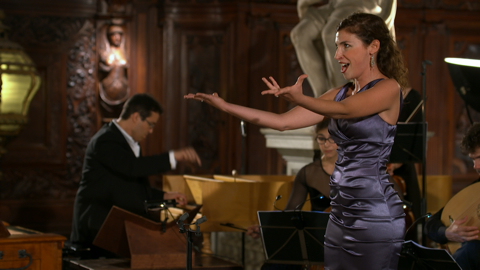