This trilogy tells the saga of Goldikova, the only mare to have won three prestigious Breeders’ Cup Mile races and to have made the front page of the Le Monde newspaper. Most champions retire to stud once the dream has become reality, and few mares are still racing at the age of 6. But such is the case for the legendary Goldikova. In this epic tale we follow this exceptional mare and the men that accompany her to races and training sessions, and in her travels and challenges.
PART 1: EYES FULL OF GOLD (27’05’’)
In 1987, the jockey Freddy Head achieved an historic double on Miesque: 2 consecutive victories in the prestigious Breeders’ Cup. The Americans went crazy for the European heroine. For the first time, a Breeders’ Cup winner had managed to conserve his title. 21 years later, Freddy Head returned to the Breeders’ Cup. The former jockey had swapped his boots for mares: Goldikova allowed him to claim yet another victory, this time as a trainer.
No sooner was his horse past the post than he was dreaming of a double... a dream his team agreed to share with us. A camera crew followed the team for a whole year (in the plane, in quarantine, beside the track…) to get a unique view of the feat. An epic saga to relive with Titi, the morning rider whose arms Goldi pulls off every morning; with Régis, who knows her inside out and accompanies her on all her travels; with Pierre-Yves Bureau who runs the stud farm that produced Goldikova for the Wertheimer brothers and of course, Freddy Head.
PART 2: THE IMPOSSIBLE DREAM (28’07’’)
This is where the story ends for most champions: when the dream becomes reality. Once they’ve proved themselves on the track, the stars retire to stud…
But the smiles on the faces of the Wertheimer brothers and Freddy Head just after the double by their champion soon betrayed the idea trotting round their heads! As Goldikova enters her 5th year in training we follow her every step: in the Channel Tunnel on route for a triumphal visit to Royal Ascot; in the Deauville rain where she fails to win the Prix Jacques le Marois, reminding us that nothing’s certain when you’re attempting the impossible!
No horse has ever won the Breeders’ Cup three times in a row, and the story we tell today could well be the legend of tomorrow.
PART 3: THE INCREDIBLE CHALLENGE (28’43’’)
They were two legends on the track, two mares capable of achieving the impossible: becoming the first horse in history to win 3 Breeders' Cup races.
November 2010: Zenyatta, the American Terminator was beaten by a whisker and became a brood mare while Goldikova triumphed once more!
This could have been the end of our story, but the champion’s entourage decided to put her title on the line once again and planned a campaign in 2011. There are few truly exceptional horses that have kept on racing to the age of 6. The crew mobilises once again to live and share this new chapter in the Goldikova story fully, immersing itself completely in the team’s world until the day of the 2011 Breeders’ Cup. 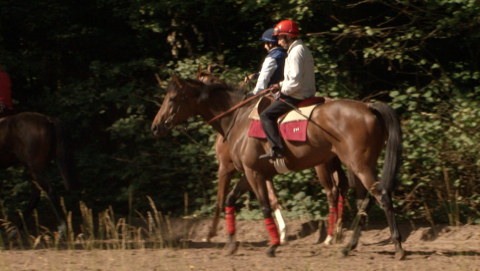