Haméka means eleven in Basque. It is said that Haméka was the eleventh house to be built in this valley, on the borders of the Basque Country, maybe 500 years ago. Others say that the farm once had only two rooms: one for a flock of 100 sheep, another for a family of eleven children.
The author of the film lives in Bordeaux, but comes here in October to follow the woodpigeon migration. Although he goes out to visit the hunting grounds, to film the migration, to pick mushrooms, shoot a few thrushes and go shopping at the Spanish village a little further off, it’s in this house that the author keeps his migration notebook, where his neighbour Jean-Michel, a shepherd, comes to visit him, and where the hunters come for a drink, bringing their stories of pigeons and the migration.
The house is the place from which we set off towards the mountains, but it is also where we return, to share the game and our tales of the day.

The logbook from an almost motionless boat, this film looks at the phenomenon of the woodpigeon migration and its roots in Basque culture. 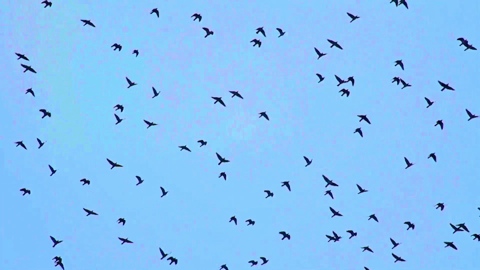