It's a pictorial adventure: a painter at work filmed under the eye (the camera) of the filmmaker within the confines of the studio. It’s the filmmaker’s point of view in this intimate and silent space, in which only the painter speaks. Over time, between the first brush stroke on the white canvas and the finished painting, the filmmaker takes us, without saying a word, to the heart of the creative process, with its doubts, its challenges, its intentions, its commitments. And in the end, there is a finished work that the viewer will have seen created in front of him.
Jacques Godin was born in 1956. He lives and works in Brittany.
He regularly exhibits in France and abroad, at the Chac Mool Gallery in Los Angeles and the Galerie Axelle Fine Arts in New York.
He is also an engraver and has created stained glass for churches and chapels, including Carhaix (2003), Plomeur (2013) and Penmarch (2017) in Finistère. 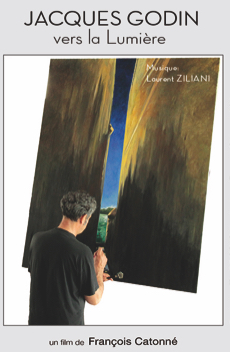