Taïg Khris in total immersion in the universe of the Slackline ! This sport consists of crossing a webbing line a few centimetres thick suspended between two points above the ground.
Andy Lewis, world champion and an emblematic figure in the sport, plays host to Taïg in Moab, Utah and shares his daily routine with him. Going beyond the sensational, the aim is to capture the relationship between two men who share a common passion for exceeding themselves and passing on their skill and philosophy: the Slacklife. At the end of this initiatory quest, Taïg Khris will have to cross the 25m Dog Hole highline, 60 metres above ground. 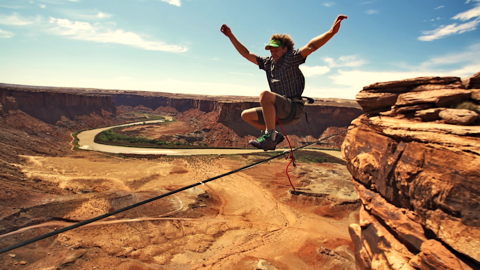