Adaptation by LM Formentin from the book by Stefan Zweig.
Mary Stuart, born Queen of Scotland and then Queen of France by the age of seventeen, was promised a bright future. But fate was to dictate otherwise for this carefree young woman in a world of men, a Catholic among Protestants, torn between affairs of state and affairs of the heart. The greatest rival of the English Queen, Elizabeth I, she paid for her intransigence and freedom with years of captivity and, ultimately, her life.
On stage, Mary Stuart, a recluse in the castle in which she is imprisoned, worn down by eighteen years of confinement, is preparing to leave the world. But she has lost none of her courage, her passion and her pride. Alone with her memories, confronting the ghosts of the men she once loved and her cousin Elizabeth I of England, who has sentenced her to death, facing history and God's judgment, Mary Stuart is ready to relive everything - joys and sorrows combined. Tomorrow, she will be beheaded.

Show recorded at the Etincelle Theater in Avignon, July 2019. 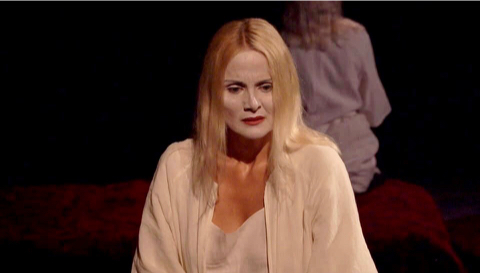