Ultimate symbol of the Wrath of God in the collective mind, locusts invasions do not however relate to an ancient past only. In Madagascar, this awkward natural phenomenon has recently been so intense that it has plunged millions of people into utter misery.

Imagine huge clouds of implacable insects ravaging and devouring crops and grazing fields. For the rural populations of Madagascar who often live in complete isolation and whose survival depends entirely on their small plot of land, this is a true catastrophe.

To fight against an insect which flies at an incredible speed and reproduces itself at an amazing rate, complex operations need to be put in place.
And there are men whose only job consists in conducting this struggle.
A struggle which resembles a real war in many ways, with a good amount of strategies, predictions and battles.

This documentary follows these men with this highly unusual occupation, in the exceptional setting of the island of Madagascar, showing the difficult conditions, on the ground and in the sky, of this war against an insect. 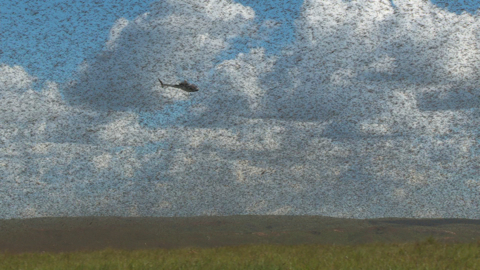