Curio, a funny mascot with mysterious origins, is the children's spokesperson. He is the one who asks the question about a scientific phenomenon and embodies the questioning, the doubt, and the natural curiosity of children. Noura, a little girl from the curionauts’ gang, gives him the answer in each episode. The credits set up Curio's character, who is searching for information in a disorganised and worried manner, as well as Noura's posture, who will try to calm him down by providing him with a scientific answer that will calm his anxiety. After the credits, which are purely fictional, the content of the episode is produced in a documentary style, with a scientific drawing (detailed diagrams, sketches sequencing the movements, etc.), occasionally integrating visuals of Curio and Noura. This is a common thread that brings a touch of humour to the story, and which keeps the children's attention.

All children are curious!

Curiosity is the very foundation of the scientific process.

Science education is a citizenship issue

At a time when fake news abounds on the internet, Curionauts wants to help children understand the scientific process.

We need to promote female role models in science.

It is a major challenge for society to help girls turn to science and fight against stereotypes in this field. This is why we have chosen Noura as

the main character of our project, together with her mascot Curio. She is the one who passes on the knowledge to Curio and to the children

rather than piling up information, Curionauts prefers to linger on a child’s question, in order to answer it in a developed way.

in science, there is no such thing as a stupid question! In science, you can make mistakes! Curionauts wants to show children that science is a great way to understand the world, that it can be fun and even poetic. They can identify with the mascot Curio and the band of heroes who accompany him, candid, a bit goofy, funny and colourful. The characters pass on knowledge to children by inviting them to join them in a world that combines documentary and fiction.

How do the tides work?

How do birds fly?

How does a microscope work?

How do we produce electricity?

How did animals appear on earth?

How are snowflakes formed?

How do viruses act?

How do we predict the weather?

What is the purpose of a satellite?

Where does lightning come from?

What is plastic recycling?

What is an allergy?

What is a fossil?

Where does poo come from?

How big is the universe?

What is a solar eclipse?

What is the scientific process?

How does soap wash?

Why does the moon change shape?

What is a cell?

Why do volcanoes erupt?

Why do boats float?

Where do hurricanes come from?

How was the earth formed? 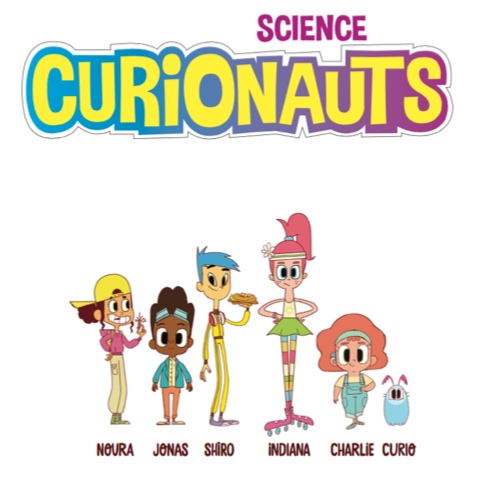