The second part of the cycle, after OCD Love, Love Chapter2, sees Sharon Eyal and Gai Behar continuing their exploration into loneliness today and its corollary, lack of connection.
“If OCD Love was dark, this will be even darker. And if this new creation were to be immersed in the water of OCD Love, this water would be blacker”, sums up Sharon Eyal. However, the choreographer (still in tandem with designer Gai Behar) has dressed her cast of 5 to 7 dancers in light-coloured unisex cotumes, a gesture that unites men and women. Trouble sets in with the steady pulse of her faithful collaborator Ori Lichtik’s score. There are references to the world of nightclubs, arms that slice through the space and tight ensemble work. Love Chapter 2 is striking in the humanity that connects the performers; a true dance community. They have an incredible ability to move from gestures that seem to be folded in on themselves to movements that are larger than life. It’s no small feat. The Hebrew for "heart" is "lev". L-E-V is also the name of the company founded in 2013 by Sharon Eyal and Gai Behar. 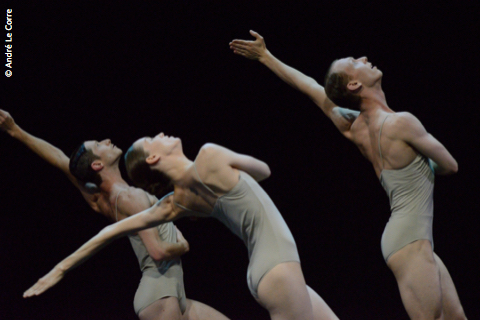