In a remote region of Peru, every December 25th, men, women and children fight to maintain their tradition.
In these isolated mountains in the heart of the Peruvian Andes, among the illuminated Christmas trees, cribs and figurines, a five hundred year old tradition is perpetuated to settle conflicts: here, as a gift, every Christmas, friends, neighbours, enemies and acquaintances deliberately dispense the blows they have been withholding during the year.

The Takanakuy is a sporting event, a court, a party and a tradition that unites the Chumbivilcanos around the Runa culture.
This complex culture combines symbols and stories from the Incas that condone violence and condemn the Spanish colonizers. The baby Jesus rubs shoulders with Pacha Mama and pre- and post-colonial roots mix in a way that’s rarely seen.
Fighting on December 25 ... to make peace. Competing to live together better and to strengthen the sense of community.

This way of seeing and living confrontation, peace and fighting can be shocking to Westerners. But does this violence, which we condemn, have hidden virtues?
On the morning of December 25th, everyone is ready: colourful masks, costumes… there’s tension and euphoria in the air as the fighters enter the ring. Spectators huddle in the stands watching the sparring without taking sides. No one really cares who wins or loses, if such a thing applies. When one of the two competitors gets the upper hand or after a few minutes, the referee stops the fight. The Abrazo puts an end to the bout and marks it down as a reconciliation.

A reflection on violence, living together and cultural identity. 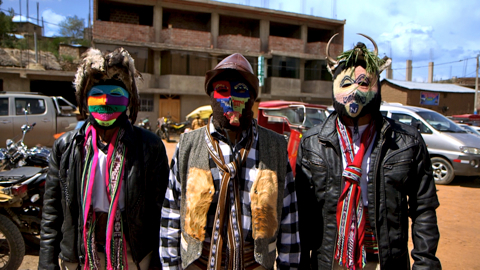