November 17th, 2018 marked a turning point in France’s social and political history. Over the months, citizens started speaking out in an unprecedented way with the spontaneous creation of the Gilet Jaune (Yellow Vest) movement. Every Saturday all over France, people mobilised and fraternised on roundabouts. Very soon, the spark became a flame and the whole country caught fire.
Thousands of women took to the streets to say no to violence and political manipulation. They stood up in the name of their families, their children, their future, and they marched in all the cities and throughout the countryside. It is they who are at the heart of this documentary composed of 6 films shining the spotlight on different parts of France.

They are nurses, students, bus drivers, farmers, retirees, workers, cleaners and supermarket staff. Their exasperation is shaking up the Republic and their testimonies illustrate the general collapse of purchasing power. Their anger is great but they are above all pacifists.
The figures speak for themselves: out of the millions of people working in poverty in France, the majority are women affected by job instability and over-indebtedness.
Long invisible, these women who claim a place in the Gilets Jaunes movement agreed to open their hearts and their homes to us.

In these films, we give the floor to all of those who, with all their differences, their sensibilities and the hardships they have endured, are fighting to survive, to raise their children and to maintain their hope in the future.

THE WOMEN'S MARCH (Provence-Côte d'Azur) - Director: Anne Gintzburger
It’s a peaceful march that the Gilet Jaune women of the south of France have embarked upon. Leaving their children and their work behind for a month, Sarah, Manon, Fabienne, Marie and their comrades are making the journey from Marseilles to Paris on foot. Their people’s march is an act of resistance. As they travel through the country, a picture of an angry France emerges, and people who are suffering from the same hardships.
But together, these women have found the strength to face their challenges. They have chosen to lift the veil on the precarious nature of their lives, and to speak in this film about the solidarity born on the roundabouts.

ANGRY WOMEN (Bourgogne Franche Comté) - Directed by: Anne Gintzburger
Year after year, successive agricultural crises and the collapse of local industries have plunged many inhabitants of the Saône et Loire into financial insecurity. While the countryside is emptying of its young people, as the villages are losing their schools, their post offices and their doctors, small towns are seeing unemployment rise and single-parent families unable to make ends meet. Women and their children are the first to feel the impact of the economic downturn.
Lydie, Sabrina, Fatima, Fanny and their comrades have found a reason to get back on their feet by joining the Gilet Jaune movement and thus defend their future and that of their children. Long invisible, these women have decided to speak out.

THE WOMEN OF THE ROUNDABOUT (Normandy) - Directed by: Anne Gintzburger
They got to know each other on the roundabout of a small village in Le Perche, and they shared the difficulties of their lives. By joining the Gilets Jaunes, the women of Normandy discovered that they were no longer alone. Every Saturday, for months on end, Stéphanie, Sandra, Chantal and their comrades mobilised, until they no longer recognised themselves in a movement that had become radicalised and worn out. So they decided to change their lives in their own way. This film describes their new ecological social struggle.

ALL STAND TOGETHER (Grand Est) – Directed by: Anne Gintzburger
They are “the Amajaunes” and they have taken the lead in the women's rebellion in the Grand Est. They are recording their story in an account that may become a book. They are all mothers, and they are all fighting for the future of their children in a region heavily marked by the collapse of local industries. Together they are defending solidarity and the freedom to be able to make a decent living from one's work.

THE COMBATANTS (New Aquitaine) – Directed by: Anouk Burel
A long way from Bordeaux, where the demonstrations were intense, this film sets out to meet a small group of women from the Gilet Jaune movement, reunited on the Rond Point Auchan Sud in Poitiers. Five women who fought peacefully for a year and who would never have had the opportunity to meet one other outside of this movement. This film testifies to the solidarity between these women, their special bond, which transcends social barriers, and the way in which they found a new place for themselves and emerged from their isolation together.

THE GUARDIANS OF THE ISLAND (Reunion Island) - Directed by: Clair Perdrix
They didn't know each other a year ago. Their backgrounds and social situations are different, but they unwittingly shared the same revolt against the high cost of living, a lack of prospects for the future, and a contempt for those who make the decisions 10,000km away.
For the first time in their lives, Reunionese women decided that men had monopolised the combat for long enough and that they could be silent no longer.
They went to the front from the start of the movement, dressed in their yellow chasubles, sacrificing, if necessary, their careers and sometimes even their family life.
Through the portrait of five women, this film tells the story of a struggle that continues beyond the roadblocks and which has profoundly transformed each of them. 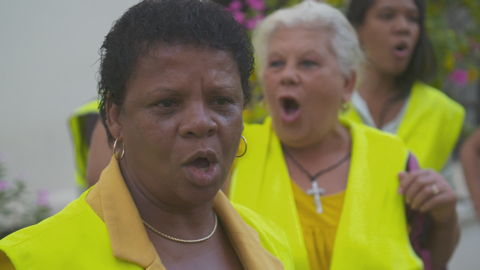