TIKI POP traces the history of the Tiki movement, popular in the United States during the twentieth century.
Created in the 1930s, the Tiki style is a subtle cross between the culture of the South Seas and American pop culture, and reached its peak in the 1950s. The term Tiki, which can be translated to “Man,” “God,” or “Man-God,” is a representation of Hawaiian gods. The Tiki style is found mainly in sophisticatedly decorated bars and restaurants, where strange music, sounds of flowing water, and huts reminiscent of Polynesian paradises mix together. In search of escape, the curious travel to this unknown world of Tiki, to a universe that appears both mysterious and dangerous. Palm trees, wooden statues, and flowery robes have become the accessories of the Tiki look, which has influenced multiple art forms such as literature, music and cinema. 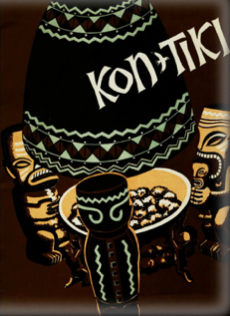