The opera is inspired by the play "Turandot" by Count Carlo Gozzi. "Turandot, the Emperor’s daughter, challenges her suitors to solve three riddles. She will marry the one who succeeds, but those who fail will be executed. Kalaf, an exiled prince in disguise, takes up the challenge”. Busoni composed the music in 1907 and wrote the opera during the First World War. Rejecting psychology and naturalism, in 1917 Busoni, an unclassifiable composer straddling Italy and Germany, created what he called a "supernatural opera", presenting a distorted version of reality, its irreverent, distanced and dark atmosphere highlighting the irony in every line.
The Catalan choreographer and director Cisco Aznar creates funny and colourful shows that are sometimes compared to the films of Almódovar, and which have already made their mark on the international stage. This short and intense work, full of exoticism and humour, favouring fantasy over tragedy, is particularly interesting for anyone wishing to discover the opera. 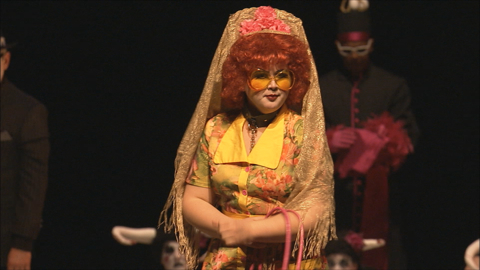