In 2004, the creation of the artists’ collective Les Dissonances by the violinist David Grimal initiated the start of an extraordinary adventure: a tribute to the famous Mozart quartet as well as the sign of a constructive divergence from conventional thinking. Les Dissonances play without a conductor!

With its Sevillian rhythms, its castanets and Basque drum, it’s an imaginary Spain that rings out in Iberia, the third of the Claude Debussy’s Images pour Orchestre, composed between 1905 and 1908. Dating from the same year, the third of Ravel's Miroirs for piano, Alborada del gracioso, was orchestrated by the composer himself. Finally, David Grimal plays Edouard Lalo's Spanish Symphony, dedicated to the violinist Pablo de Sarasate.

Concert recorded in January 2018 at the Philharmonie de Paris 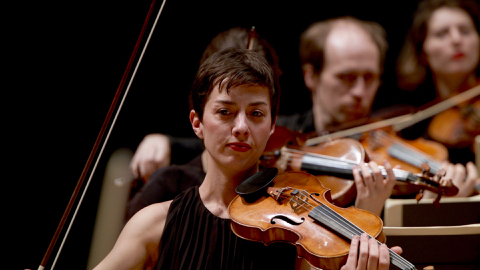