One of Beethoven's most beautiful string quartets performed by exceptional musicians.
Composed in 1806 and published in January 1808, it is the last of the three quartets dedicated to Prince Andrey Razumovsky, whose name it bears.
This quartet was composed during the very productive year of 1806, which also saw the composition of the two other quartets in the same opus (Nos. 7 and 8), the Fourth Piano Concerto, the Fourth Symphony and the Violin Concerto. It is the only one of the three Razumovsky quartets to have been favourably received by the critics.
Beethoven delivers an undeniable demonstration of his maturity in this, the most powerful and most playful of the Razumovsky quartets, which is also the only one that does not contain a Russian theme. After a mysterious introduction that sometimes borders on atonality, the first movement develops into the exuberant joy of the Allegro vivace. The second movement is the most tense and meditative, while the fugal finale brings the work to a truly unrestrained conclusion. 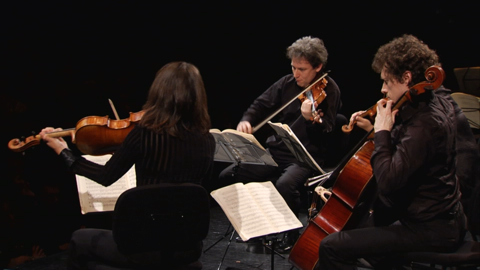