"Parents Models" is a comedy in which two actors play all 15 members of one family (father, mother, three children, grandparents, brothers, sisters, surprise guests, friends, enemies...)
A family moves by mistake into a huge apartment that isn’t meant for them. Too late, they’ve signed the contract… and they won’t be leaving without a fight!
CAMILLE and SIMON, (almost) model parents, see their children grow up, their teenagers mature, their parents grow old... and life carries on in a whirlwind of crazy adventures.

The bond between the two actors, Marie Blanche and Alain Chapuis makes this a joyful show, that is both fresh and revealing of the evils of our society: purchasing power, old age, family conflicts, the internet and young people... while Philippe Riot’s clever staging incorporates the use of film, with a screen showing what’s going on in the kitchen. 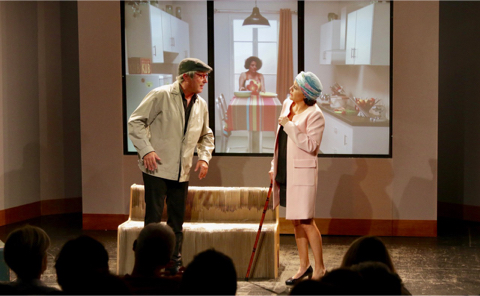