In this film we see the artist, alone with the filmmaker, working on a very large drawing, 225x165cm in size. He begins it in the whiteness of the immense canvas covered with paper, the filmmaker following his work through to completion. Velickovic talks about himself as he draws. He reflects out loud on the composition of the work and the elements he’s drawing, sharing his doubts, reflecting on the progress of the drawing and its composition, his voice accompanied only by the squeaking of the pen as it attacks the paper, leaving behind its trail of Chinese ink.
This documentary is part of a collection of portraits of painters devised and directed by François Catonné (DOP on more than sixty films: Régis Wargnier, Bertrand Blier, Robert Enrico, Gerard Mordillat...). The idea is to show the painter at work: all the action takes place in the artist’s studio, in which they are the only people to be seen and heard. 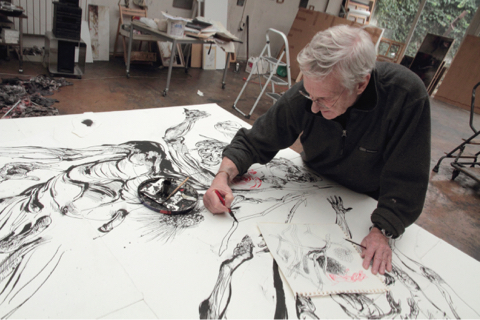